Come to America and get killed by tornadoes

Why doesn't NOAA have a SPANISH WEATHER RADIO BROADCAST?

*****DID HISPANICS GET HURT AND DIE BECAUSE NO ONE COULD GIVE THEM WARNING IN THEIR LANGUAGE?****** 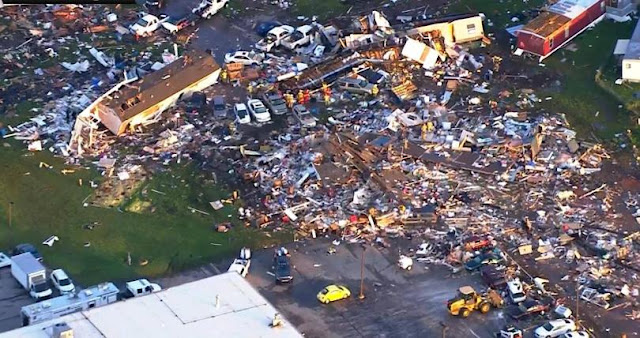 EVERYTHING IS STILL UNCERTAIN

Was this an example of NEGLECT TO THE HISPANIC COMMUNITY IN OKLAHOMA?

So far officials in El Reno, Oklahoma are praising first responders and are praising their community as a group of "people of faith."  From what they've told us it sounds like 2 people were killed and possibly over 20 hospitalized with people in critical condition in surgery.  Also we are being told that the deaths happened in the mobile home park and those injured were also from the mobile home park.

From what I saw via KWTV9 it looks like about 8 mobile homes were completely destroyed to rubble and they say that are dealing with a language barrier due to this Hispanic community who lives in the mobile home park:

At the same time KWTV9's on the air meteorologists are praising themselves how they are the best storm team in the nation along with their aggressive team of storm chasers in their field providing early warning to their viewing audience.  Here's the problem:

If this was a Hispanic community that doesn't read speak or understand English they would not have heeded the warning due to their language barrier.  So guess what?  Hispanics who don't speak English are not safe since they cannot understand the tornado warning at all and keep track of what's going on with weather due to their language barrier with English.  So what needs to be done?  They call in a translator after people get killed and hurt and no one can warn these people in English because they do not understand English.

So who's fault is this?

I have other questions the media should be asking about this including but not limited to:

No doubt there will be more developments on this story...stay tuned.

https://www.news9.com/story/40535218/watch-crews-survey-damage-from-deadly-el-reno-tornado
Posted by The News UNIT at 4:44 AM